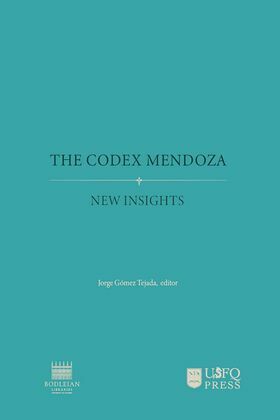 Conceived as a contribution to the continuous construction of the identity of the Codex Mendoza, the present volume is organized around three axes: material analysis, textual and stylistic interpretation, and reception and circulation studies. The works of Barker-Benfield and MOLAB further our objective of understanding the manuscript's materiality. The re-binding and conservation process registered by Barker-Benfield has allowed us to do away with speculation regarding the method of production used to create the manuscript and its previous bindings. This, in turn, has allowed heretofore accepted connections, such as the authorship of Francisco Gualpuyogualcal, to be reexamined. Similarly, the analysis undertaken by the MOLAB team and headed by Davide Domenici has settled the debate on the nature of the pigments used in the production of the manuscript. This has added additional layers of nuance to previously held interpretative hypotheses on the meaning of specific pigments and the strictness of their application in the tlacuilolli. While color holds meaning for the tlacuilo, color is not inexorably linked to its materiality. These observations have the potential to inspire a new generation of interpretative studies, based on ever more accurate data regarding the material nature of the Codex Mendoza.

Interpretative studies of the manuscript in this volume represent a line of inquiry that, by considering the manuscript from the complex perspectives of the work of art, literature, and bibliography, complement previous anthropological and historical readings of the Codex Mendoza. My essays as well as those by Diana Magaloni and Daniela Bleichmar reconsider the number and style of the artists who produced the manuscript in order to understand both the process by which it was created as well as the place it occupies in the artistic context of the early viceroyalty. Far from entering a binary relation between subjugator and subjugated, the decisions made by these artists and intellectuals manifest the forms of thinking and seeing time and space in the Mesoamerican world. I demonstrate that the pictures in the Codex Mendoza were painted in a workshop in which one, two, or more individuals collaborated on each page to create a single composition; as such, the creation of these pictures took on an air of rituality and functioned as "an instrument to recreate, reactualize, and make coherent the historical becoming linked to territory with cosmic patterns" (Magaloni, this volume). This last observation complements and reinforces Joanne Harwood's proposed reading of the third section of the manuscript. For Harwood, notwithstanding the originality of the visual solutions used to compose this section of the manuscript, the Codex Mendoza's pre-Columbian model resonates with a Mesoamerican religious genre: the teoamoxtli.