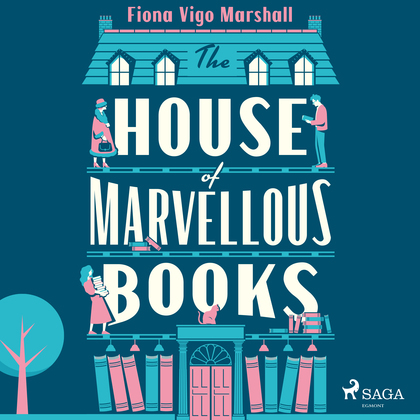 The House of Marvellous Books

Tucked away in a near-derelict library in the center of London, The House of Marvellous Books is a publishing house on the brink of financial disaster.

With assistant Ursula asleep at her desk, head publisher Gerard going health and safety mad, and chief editor Drusilla focused on finding a supposedly priceless but famously missing manuscript, there is hardly anyone left to steer the ship. Young Mortimer Blackley, assistant editor, charts the descent of the House in his logbook as it lurches from one failure to the next.

Will mysterious Russian buyers, lurking in the wings, stop the ship from sinking at great cost to all? Or will Drusilla find the legendary Daybreak Manuscript and save the day?

With witty and sharp observations, Fiona Vigo Marshall draws upon a career spent working in small publishing houses to create a laugh-out-loud ode to the publishing industry.

´The House of Marvellous Books´ will delight those interested in books about books, such as ´Book Lovers´ and ´The Hating Game´.

What readers are saying:

"This book was hilarious and quirky! The eccentric characters were fun to follow along with. The pace of everything was well-timed, and kept interesting throughout!" - Goodreads reviewer

"I loved this hilarious, a bit eccentric, and witty book. It's populated by quirky and fleshed-out characters and there's plenty of literary references. A book written in diary format that I loved." - Goodreads reviewer

Fiona Vigo Marshall was born in London and educated at Somerville College, Oxford. Her debut novel ´Find Me Falling´, published by Fairlight Books in 2019, was shortlisted for the Paul Torday Memorial Prize 2020. ´The House of Marvellous Books´ is her second novel.

Her short stories and poems have been nominated for numerous awards, including the V. S. Pritchett Memorial Prize, which she won in 2016 with her short story ‘The Street of Baths’. Her work has appeared in Prospect, Ambit, The Royal Society of Literature Review, Orbis International Literary Journal, and The London Journal of Fiction.