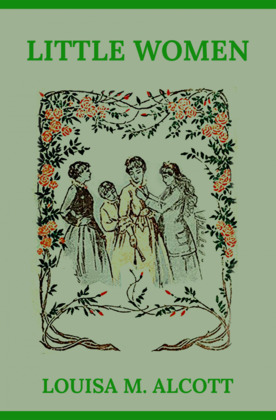 Little Women: The Original 1868 Edition (A Classic Novel Of Louisa May Alcott)

Little Women is a coming-of-age novel written by American novelist Louisa May Alcott (1832–1888).

Originally published in two volumes in 1868 and 1869, Alcott wrote the book over several months, at the request of her publisher. The story follows the lives of the four March sisters—Meg, Jo, Beth, and Amy—and details their passage from childhood to womanhood. Loosely based on the lives of the author and her three sisters, it is classified as an autobiographical or semi-autobiographical novel.

Little Women was an immediate commercial and critical success, with readers eager for more about the characters. Alcott quickly completed a second volume (titled Good Wives in the United Kingdom, though the name originated with the publisher and not Alcott). It was also met with success. The two volumes were issued in 1880 as a single novel titled Little Women. Alcott subsequently wrote two sequels to her popular work, both also featuring the March sisters: Little Men (1871) and Jo's Boys (1886).

The novel has been said to address three major themes: "domesticity, work, and true love, all of them interdependent and each necessary to the achievement of its heroine's individual identity." According to Sarah Elbert, Alcott created a new form of literature, one that took elements from romantic children's fiction and combined it with others from sentimental novels, resulting in a totally new genre. Elbert argues that within Little Women can be found the first vision of the "All-American girl" and that her various aspects are embodied in the differing March sisters.