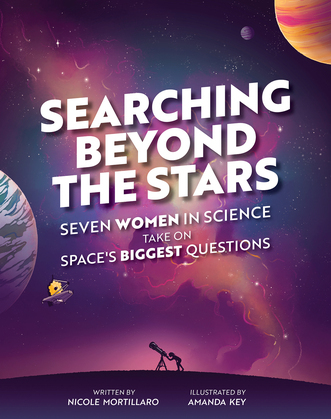 Searching Beyond the Stars

Are we alone in the cosmos? Could we one day live on a different planet? How is life formed? What other secrets does the universe hold?

Through profiles of seven remarkable women scientists and their achievements in their respective fields, Searching Beyond the Stars takes us deep into space, looking at once to the distant past and the distant future to capture the awe and intrigue of some of the biggest questions we can possibly ask.

Making connections across astronomy, chemistry, physics, history, and more, Nicole Mortillaro draws on her own experience as a woman in STEM to highlight the incredible odds each scientist faces while chasing new discoveries and the ways in which sexism and racism, among other barriers, still affect women scientists to this day. Sidebars filled with fascinating facts take readers behind the science and encourage them to delve deeper. Vibrant illustrations by Amanda Key showcase the wonder of space and the passion and eternal curiosity that drive each scientist in their work unfurling the mysteries of our universe.

Jill Tarter, radio astronomer and project scientist at NASA. Opened up possibilities for communicating with aliens. Lives in Berkeley, California.

Sara Seager, astrophysicist and planetary scientist. Credited with laying the foundation for the field of exoplanet atmospheres and the search for life on exoplanets. Originally from Toronto, Ontario, Sara now lives in Massachusetts.

Tanya Harrison, planetary scientist and geologist. Was on the science operations team for NASA’s Mars Reconnaissance Orbiter analyzing imaging from a geologist’s standpoint to see whether we might one day live on Mars. Director of Science Strategy at Planet Labs. Lives in Washington, D.C.

Renée Hložek, astrophysicist and cosmologist. Her work is to imagine, dream, and calculate the mathematical equations that govern and predict the end of the universe. Originally from South Africa, Renée now lives in Toronto, Ontario.

Ashley Walker, astrochemist, science communicator, and activist. Co-organizer of #BlackinChem, #BlackInAstro, and #BlackInPhysics to highlight and amplify the voices of Black researchers and scholars in these fields. Lives in Chicago, Illinois.