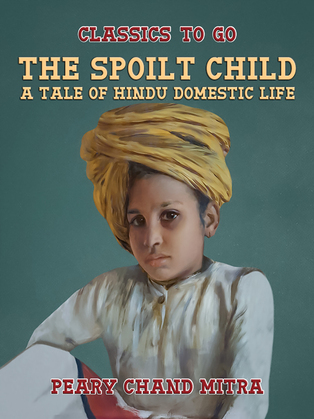 The Spoilt Child, A Tale of Hindu Domestic Life

Excerpt: "BABURAM BABU, a resident of Vaidyabati, was a man of large experience in business affairs: he was famous for his long service in the Revenue and Criminal Courts. Now to walk uprightly without taking bribes when engaged in the public service, is not a very long-established custom. Baburam Babu’s procedure was in accordance with the old style, and being skilful at his work, he had succeeded, by servility and cringing, in imposing on his superior officers; as a consequence of which he had acquired considerable wealth within a very short time. In this country a man’s reputation keeps pace with the increase of his riches or with his advancement: learning and character have not anything like the same respect paid to them. There had been a time when Baburam Babu’s position had been a very inferior one, and when only a few individuals in his village had paid him any attention; but later, as he came into the possession of fine buildings, gardens, estates, and a good deal of influence in many ways, he found himself with a host of friends as his followers and advisers. Whenever during his intervals of leisure he went to his house, his reception-room would be crowded with people. It is always the case that when a man has a sudden accession of wealth there is a rush of people to him, just as the shop of a sweetmeat seller will become full of flies as long as there are sweetmeats to be had. At whatever time you might visit Baburam Babu’s house you would always find people with him: rich and poor, they would all sit round and flatter him, the more intelligent among them in indirect fashion only, the lesser folk outright and unblushingly, agreeing with everything he said. After some time spent in the way we have described, Baburam Babu took his pension, and remained at home occupied in the management of his estates and in trade."