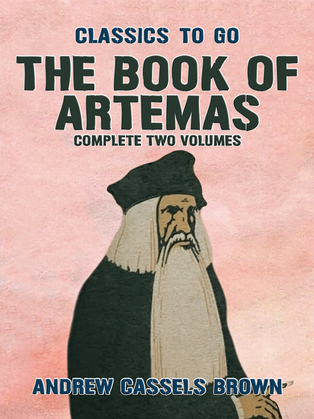 Excerpt: "The words of Artemas of the scribes that were in Lon in the land of En. Of the things that were and of the things that were to be: concerning men and the things that men did do. Now there was peace over all the land of Eur and amongst all the nations that abode there, it was a time of great content. But Willi, who ruled over the men of Hu, was a crafty man and greedy, and his ways were devious. And when he beheld the prosperity of the land and the industry of those that dwelt round about, and that they did live in peace, the one with the other, his heart grew black within him and his soul vomited envy. Moreover, he was a proud man and ambitious withal. His covetousness was like unto a tree, that being planted in fertile ground, flourisheth mightily; and the independence of the peoples was as gall unto his vanity. Now the son of Willi was a young man, and he was puffed out with pride and his mind was empty; in his living, he was vicious, and his name, it was Mud. And when Mud saw that his father's soul was torn with the violence of his envy and that he coveted that which was not his, it rejoiced him exceedingly. And he laid himself out to entice his father, and did speak many specious words unto him, and was for ever at him. And Mud said unto his father, All Highest, hail! And Willi answered him, saying, Thou art my son: And Mud said unto him, Great art thou above all the kings of the earth, for thou hast served the Lord faithfully throughout the days of thy life."