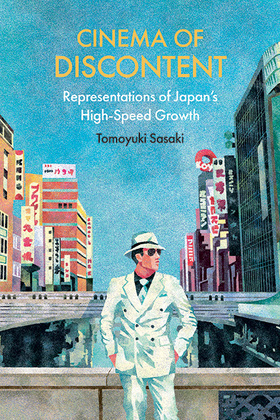 Representations of Japan's High-Speed Growth
by Tomoyuki Sasaki (Author)
Read sample online Download sample
Nonfiction Arts Film & video History & criticism
warning_amber
One or more licenses for this book have been acquired by your organisation details
EPUB
Unlimited loans, One at a time
Details

From the mid-1950s to the mid-1970s, Japan experienced an unprecedented level of economic growth, transforming itself from a war-devastated country to a global economic power. Our image of postwar Japan has been shaped by this event, and we tend to see its history as a story of great national success. Cinema of Discontent challenges this view and details the tensions generated by massive and intense capitalist development through analyses of popular cinema produced during the era of high-speed growth. The films discussed in this book, directed by Kawashima Yūzō, Masumura Yasuzō, Inoue Akira, Ezaki Mio, and Kumashiro Tatsumi, attracted broad audiences yet remain understudied. Cinema of Discontent contextualizes these films in relation to the politics, economy, intellectual discourse, and cultural texts of the time. By doing so, it demonstrates how these films address problems immanent to Japan's postwar capitalism, including uneven development, increasing corporate control over individuals, precarious and contingent work, and militarized peace and prosperity.