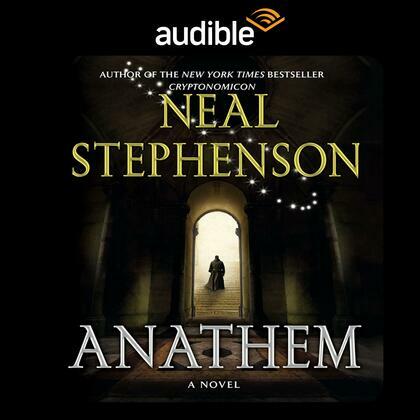 Fraa Erasmus is a young avout living in the Concent of Saunt Edhar, a sanctuary for mathematicians, scientists, and philosophers, protected from the corrupting influences of the "Saecular" world by ancient stone, honored traditions, and complex rituals.

Over the centuries, cities, and governments have risen and fallen beyond the concent's walls. Three times during history's darkest epochs, bloody violence born of superstition and ignorance has invaded and devastated the cloistered mathic community. Yet always the avout have managed to adapt in the wake of catastrophe, becoming out of necessity more austere and less dependent on technology and material things. Erasmus, however, has no fear of the outside - the Extramuros - for the last of the terrible times was long, long ago.

Now, in celebration of the week-long, once-in-a-decade rite of Apert, the fras and suurs prepare to venture outside the concent's gates - opening them wide at the same time to welcome the curious "extras" in.

During his first Apert as a fra, Erasmus eagerly anticipates reconnecting with the landmarks and family he hasn't seen since he was "collected". But before the week is out, both the existence he abandoned and the one he embraced will stand poised on the perilous brink of cataclysmic change.

Powerful unforeseen forces threaten the peaceful stability of mathic life and the established ennui of the Extramuros - a threat that only an unsteady alliance of Saecular and avout can oppose - as, one by one, Raz's colleagues, teachers, and friends are all called forth from the safety of the concent in hopes of warding off global disaster.

Suddenly burdened with a worlds-shattering responsibility, Erasmus finds himself a major player in a drama that will determine the future of everything - as he sets out on an extraordinary odyssey that will carry him to the most dangerous, inhospitable corners of an unfamiliar planet...and far beyond.