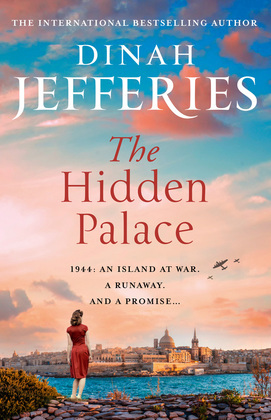 by Dinah Jefferies (Author)
Read sample online Download sample
Fiction Historical
warning_amber
One or more licenses for this book have been acquired by your organisation details
EPUB
26 loans, One at a time
Details


An island of secrets. A runaway. And a promise…

A rebellious daughter
1925. Among the ancient honey-coloured walls of the tiny island of Malta, strangers slip into the shadows and anyone can buy a new name. Rosalie Delacroix flees Paris for a dancer’s job in the bohemian clubs deep in its winding streets.


A sister with a secret
1944. Running from the brutality of war in France, Florence Baudin faces a new life. But her estranged mother makes a desperate request: to find her vanished sister, who went missing years before.


A rift over generations
Betrayals and secrets, lies and silence hang between the sisters. A faded last letter from Rosalie is Florence’s only clue, the war an immovable barrier – and time is running out…

Praise for The Hidden Palace

“Completely swept me away to another place and time. Dinah is the queen of sumptuous settings, transporting the reader effortlessly from chocolate-box Devonshire to the cabaret clubs of 1920s Paris and war-torn Malta. A marvellous, multi-layered story, populated with characters to really care for”—HAZEL GAYNOR


“Dinah Jefferies wields her storytelling magic on the island of Malta . . . It’s engrossing and sensual, full of the heat of the Mediterranean sun”—GILL PAUL


“Powerful, passionate and profoundly moving . . . this compelling mix of love and tragedy vibrates with warmth and pain, and captures the intense dislocation of war”—KATE FURNIVALL


“Sweeping and sumptuous with a gorgeously described sense of place. A marvellous adventure”—TRACY REES

Praise for Daughters of War


“A warm and engrossing tale of passion and courage. I loved it”—RACHEL HORE