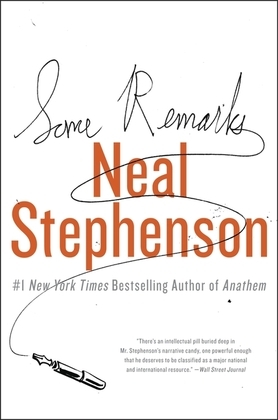 Essays and Other Writing
by Neal Stephenson (Author)
Read sample online Download sample
Fiction Short stories Nonfiction Literary collections Essays
warning_amber
One or more licenses for this book have been acquired by your organisation details
EPUB
26 loans, One at a time
Details

#1 New York Times bestselling author Neal Stephenson is, quite simply, one of the best and most respected writers alive. He’s taken sf to places it’s never been (Snow Crash, Anathem). He’s reinvented the historical novel (The Baroque Cycle), the international thriller (Reamde), and both at the same time (Cryptonomicon).

Now he treats his legion of fans to Some Remarks, an enthralling collection of essays—Stephenson’s first nonfiction work since his long essay on technology, In the Beginning…Was the Command Line, more than a decade ago—as well as new and previously published short writings both fiction and non.

Some Remarks is a magnificent showcase of a brilliantly inventive mind and talent, as he discourses on everything from Sir Isaac Newton to Star Wars.