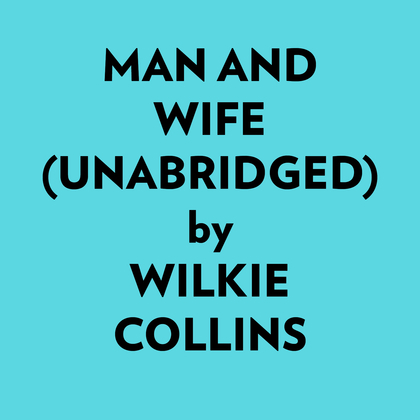 Man and Wife is the ninth novel by Wilkie Collins, and was published in serial form in 1870. Like many of his other novels it has a complex plot and tackles social issues, in this case the thenlax state of the marriage laws, particularly in Scotland and Ireland. As always, Collins deals carefully but frankly with human personal behavior. To avoid offending Victorian morals too greatly, much is implied rather than stated outright. Nevertheless, even dealing with such matters at all led to his novels being derided as “sensation fiction” by his critics. By today’s standards, of course, they wouldn’t even raise an eyebrow.

In Man and Wife, the main character Anne Silvester has fallen pregnant to a muscular and handsome, but boorish man, Geoffrey Delamayn, to whom she is not married. She is working as a governess at a house in Scotland. Anne arranges to meet Delamayn secretly at a garden party and angrily demands that he fulfill his promise to marry her, that very day. He very reluctantly agrees to a secret, private marriage, knowing that a public marriage would badly affect his inheritance prospects. How is the marriage to be arranged quickly but kept quiet? Anne has a plan based on her understanding of the looseness of the marriage laws in Scotland. Naturally, of course, things go badly wrong with this plan and many complexities arise.

Collins is deeply critical of the state of contemporary marriage laws, both in how loosely they were framed, and in how little power over their own lives they gave to women once they were married, even if married to a brutal man. He also uses this novel to denounce the worship of sporting heroes and the obsession with physical prowess rather than mental superiority as a primary indication of male virtue.

Though not as popular as his novels The Woman in White and The Moonstone, Man and Wife received a good critical reception when it was released and was a commercial success.