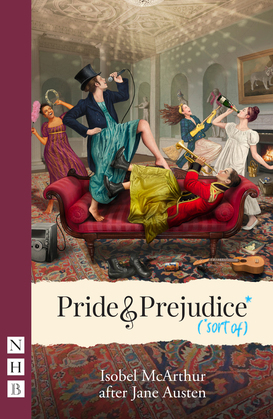 (West End Edition)
by Jane Austen (Author)
Download sample
Fiction Drama
warning_amber
One or more licenses for this book have been acquired by your organisation details
EPUB
Unlimited loans, One at a time
Details

This unique take on Jane Austen's beloved novel is an adaptation like no other, drawing on over two hundred years of romantic pop history, and featuring five young women with a story to tell.

You might have seen them before, emptying the chamber pots and sweeping ash from the grate; the overlooked and the undervalued making sure those above stairs find their happy ending.

Of course, these women have always been running the show – after all, 'You can't have a whirlwind romance without clean bedding' – but now the servants are also playing every part. Let the ruthless match-making begin!

Isobel McArthur's acclaimed Pride and Prejudice* (*sort of) was first produced in 2018 by theatre company Blood of the Young at the Tron Theatre, Glasgow, before a UK tour the following year, produced by the two companies and the Royal Lyceum Theatre Edinburgh. It transferred to the Criterion Theatre in London's West End in October 2021.

It is a truth universally acknowledged, that an amateur company in want of an irreverent all-female adaptation of a literary classic to perform, need look no further.

'Isobel McArthur's roistering all-female pop musical adaptation remains unexpectedly true to the novel's familiar twin themes of hidden passions and economic hardships... There are laughs aplenty, both period and modern, as the cast exchange roles and genders at break-neck speed... It would have won the approval of Austen herself' - The Stage

Frankly sensational... the shocking truth of Isobel McArthur's smart, riotously funny five-woman adaptation is how faithful it is to Austen while being gloriously entertaining' - Variety

'A total blast of hilarity from start to finish... sticks faithfully to Austen's brilliant story while opening it up into a riot of fun, colour and mischief-making. It is dramatic re-invention at its most enjoyable and if Austen aficionados don't enjoy it just as much as Austen virgins, I'll eat my pink Regency bonnet' - WhatsOnStage

'A raucous and transgressive, yet surprisingly faithful, adaptation... the gags are plentiful' - Guardian

'Clever, funny, feminist, and not even shy, in the end, of a few powerful moments of true romance' - Scotsman