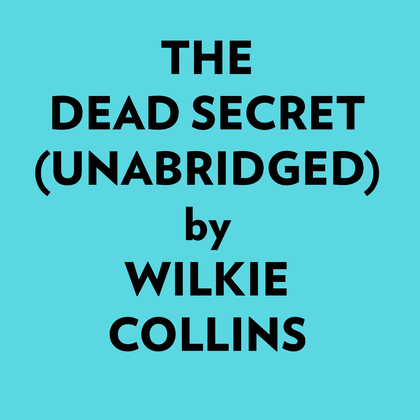 The Dead Secret is Wilkie Collins’ fourth novel. It first appeared in serial form in Charles Dickens’ Household Words magazine during 1856. Like many of Collins’ books, it features incidents and themes which were considered to be sensational at the time; in this case, sex before marriage, illegitimacy, and fraud.

The novel opens with a scene at Porthgenna Tower, a mansion in Cornwall, where the lady of the house, Mrs. Treverton, is dying. On her deathbed, she tries to force her maidservant, Sarah Leeson, to swear that she will give a letter Mrs. Treverton has written to her husband, Captain Treverton, once she is dead. The letter reveals an important family secret in which Sarah is deeply involved and which she consequently is desperately unwilling to pass on. Mrs. Treverton succeeds in making Sarah swear not to destroy the letter or remove it from the house, but dies before making the young woman swear to give the letter to the Captain. Sarah therefore finds a place to conceal it within the house.

The rest of the novel deals with Rosamond, the Treverton’s daughter, who grows to adulthood and marries Leonard Franklin, a young man of a welltodo family, who is afflicted with blindness. Franklin purchases Porthgenna Tower after the Captain’s death, and the couple plan to move into the property and renovate it. Doing so, however, means that they are likely to uncover the hidden letter concealing the family secret.

While critics don’t consider The Dead Secret to be one of Collins’ best novels, it contains some of the same elements of mystery and suspense as The Woman in White and The Moonstone, and much of his characteristic wry humor.