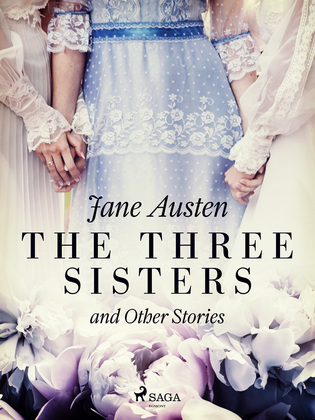 The Three Sisters and Other Stories

With handsome rich men and ladies of leisure fluttering their eyelids trying to catch their attention, 'The Three Sisters' reads like a humorous trial run for 'Pride and Prejudice'.

Told via correspondence, this is in fact a tale of a single man, Mr. Watts, who is in possession of a good fortune and is in want of a wife. Mrs. Stanhope is the mother of a family of girls who is very much in want of a son-in-law. And the girls? Despite one of them being "the happiest creature on the planet", they aren’t actually all that happy at all.

This satirical narrative of courtship and self-interest by the young Jane Austen is a must for any fan of the modern Chick-Lit novel or Rom-Com film.

As an extra treat, this edition includes four additional writings from Jane Austen, making this essential reading for any Austen fan or study. These additional pieces include:
•t'A Fragment written to inculcate the practice of Virtue'
•t'A beautiful description of the different effects of sensibility on different minds'
•t'The Generous Curate: A moral Tale, setting forth the Advantages of being Generous and a Curate.'
•t'Ode to Pity'

Jane Austen (1775-1817) is one of the most beloved British writers of all time. During her short life, she published six novels: ´Sense and Sensibility´, ´Pride and Prejudice´, ´Mansfield Park´, ´Emma´, ´Northanger Abbey´ and ´Persuasion´, that are all considered as literary classics today.

Her writing is full of sharp observations on the society in which she evolved, as well as ripe with timeless irony, and a solid dose of humour. She has created immortal characters that have inspired countless authors, novels, and movies such as 'Bridget Jones' and 'Clueless'.
The most notable film adapted from a Jane Austen novel is 'Pride and Prejudice' from 2005 starring Keira Knightley (Pirates of the Caribbean) and Matthew Macfadyen.