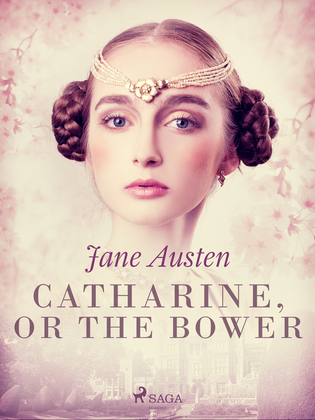 Catharine, or The Bower

What do we usually find in Jane Austen's novels? At least one girl with a conflict and a handsome man or two to rush in and save the day. If nothing else, Jane was a romantic through and through!

Catharine is a young orphan being raised in the country. Her best friends are the four children of the vicar. After the vicar’s death, they have been sent off to various locations to make their way in the world.
Mr. and Mrs. Stanley come to visit Catharine and her guardian aunt. They have a daughter Camilla, and a handsome son Edward. Camilla and Catharine become friends and Camilla is sure that Catharine and Edward will become a couple.

The heroine, Catharine Percival, is young and naive, but intelligent and spirited. Although she is an orphan, as befits the heroine of a novel written in the late eighteenth century, she is hampered in her adventures by her loving aunt who is overprotective and fearful of the world

Catharine is soon visiting London as well. Will she reunite with her old friends? Will Catharine and Edward become a couple or will something from the past force them apart?

Jane Austen (1775-1817) is one of the most beloved British writers of all time. During her short life she published six novels: ´Sense and Sensibility´, ´Pride and Prejudice´, ´Mansfield Park´, ´Emma´, ´Northanger Abbey´ and ´Persuasion´, that are all considered as literary classics today.

Her writing is full of sharp observations on the society in which she evolved, as well as ripe with timeless irony, and a solid dose of humour. She has created immortal characters that have inspired countless authors, novels, and movies such as Bridget Jones and Clueless.
The most notable film adapted from a Jane Austen novel is Pride and Prejudice from 2005 starring Keira Knightley ( known from Pirates of the Caribbean) and Matthew Macfadyen.