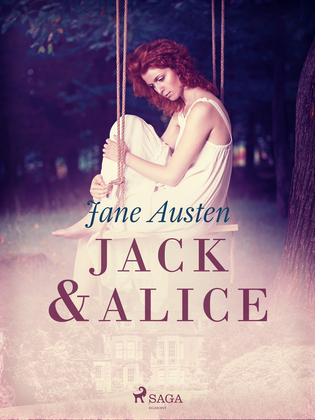 ‘When you are more intimately acquainted with my Alice, you will not be surprised, Lucy, to see the dear creature drink a little too much; for such things happen every day. She has many rare and charming qualities, but sobriety is not one of them.’

Decidedly strange, illogical and out of the norm, "Jack and Alice" depicts life in Pammydiddle, a pleasant English town with a love of parties, scandal and gossip.
The work is full of parody and a pastiche of many literary trends of the time. Another classic short story from Austen's "juvenilia", written in her teenage years and originally shared with her family and friends. Full of bold, ridiculous characters and the satire she would later be famed for, it is the perfect insight into the quick-witted mind of young Austen.

Jane Austen (1775-1817) is one of the most beloved British writers of all time. During her short life, she published six novels: ´Sense and Sensibility´, ´Pride and Prejudice´, ´Mansfield Park´, ´Emma´, ´Northanger Abbey´ and ´Persuasion´, which are all considered literary classics today.

Her writing is full of sharp observations on the society in which she lived, as well as ripe with timeless irony, and a solid dose of humour. She has created immortal characters that have inspired countless authors, novels, and movies such as Bridget Jones and Clueless.
The most notable adaptation is Joe Wright's 2005 Pride and Prejudice, starring Keira Knightley (Pirates of the Caribbean) and Matthew Macfadyen (Succession).