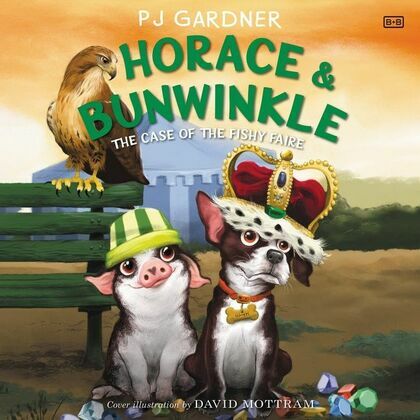 Horace & Bunwinkle: The Case of the Fishy Faire

The final book in a young middle grade mystery-adventure series about Horace, an anxious Boston Terrier, and Bunwinkle, an exuberant potbellied pig, who team up to solve crimes in their barnyard and neighborhood.

In this third mystery, the pet-tective duo must solve a series of crimes at the local Renaissance Faire. Perfect for fans of Mercy Watson, The Trouble with Chickens, and A Boy Called Bat.

Life is never quiet at the Homestead. First, it was disappearing animals, then a power-hungry dairy queen. Now it’s a Renaissance Faire, a noisy, stinky spectacle that drives Horace to distraction. Bunwinkle, on the other hand, can’t get enough of the festivities—she loves the thrilling jousts, the court intrigue…and especially the pickles on a stick.

But when Eleanor and Clary’s ice cream buckets are stolen, and several of the food stalls are vandalized, it’s clear that there’s something fishy going on at the faire. And suddenly the pet-tectives find themselves with a new case on their hands.

One thing’s for certain: There’s no shortage of suspects. From Wendell, the nosy vegetable vendor, to Dean, the alpaca farmer who’s been getting a bit too close to Eleanor, to Uta Hawken, a Shakespeare-spouting red-tailed hawk, the culprit could be anyone.

Can the pet-tectives solve this royally tough case before the faire is ruined…or worse?