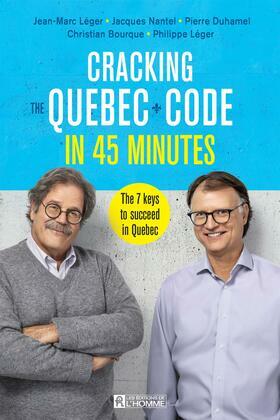 Cracking the Quebec Code in 45 minutes

Quebecers are more different than you might think, but they're not as different as they think.In 45 minutes, you will discover the new Quebec consumer and the keys to opening their hearts, minds and wallets.Most Quebecers come from a French culture, live in an English society and have an American lifestyle. Understanding their hybrid nature is your path to success in la belle province.A company that wants to establish itself in Quebec; a marketing director who wants to improve market share; an entrepreneur who wants to launch a new product; a manager who wants to increase profit margins; an advertiser that wants to persuade Quebecers; a worker planning to immigrate to Quebec: All are likely to face unexpected obstacles if they don't have a roadmap to maximize their opportunities.Using a scientific approach and thousands of private surveys, Leger, the largest Canadian-owned polling, market research and analytics firm in Canada, unveils seven character traits that make Quebecers unique and different. Going beyond clichés, prejudices, rumours and half-truths, Cracking the Quebec Code in 45 Minutes lays out facts and reveals a new and fascinating portrait.You are 45 minutes away from succeeding in Quebec.