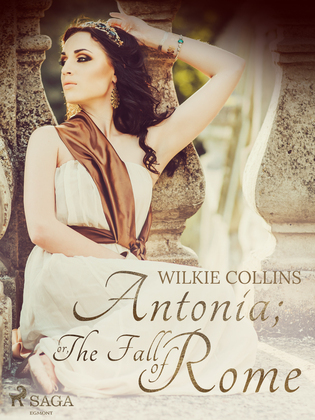 Antonia; or, The Fall of Rome

In case you've never taken a moment to stop looking at cat videos and arguing with strangers on the Internet to appreciate the readily accessible cornucopia of collected human knowledge that your phone *also* provides, reading classic literature really puts the global network into perspective.

Dickens, Brontë, Austen, Conan Doyle, Nesbith... all sitting huddled over their desks in either London or the English countryside, writing stories set in the great manors of Yorkshire, on the shores of Sussex or in the working-class district of the capital. And in addition to all taking place a stone's throw away, they are all pretty much contemporary. Sure, write what you know, but still... tis a bit boring, innit? Can't *somebody* expand the world just a tiny bit for an audience with neither affordable travel or a 5G connection?
Enter Big Willy C.

In this his first published novel, Collins tackles two conflicts in the Rome of 408 AD: Paganism vs. Christianity and the titular hero, the daughter of a Christian Roman zealot, Antonia vs. Goisvintha – a Goth survivor of a Roman massacre. And when mild-mannered Antonia ends up captured by Goisvintha's brother during a siege, a tale of betrayals, sex and cat and mouse can truly unfold.

It's not giant mech battles on distant planets exactly, but for 1850 English literature, this is pretty darn exotic.


Novelist, playwright, genre pioneer, opium addict, mentee of Charles Dickens, magnificently bearded individual – dead Englishman Wilkie Collins (1824-1889) has many titles to his name.
Having a knack for mystery and unconventional characters, Collins' biggest contribution to world literature comes in the forms of "A Women in White" (1859) and "The Moonstone" (1868), with the former being mentioned on his headstone while the latter is widely considered the first modern detective novel.