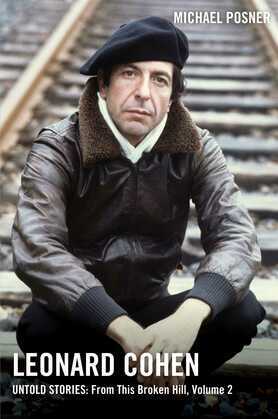 by Michael Posner (Author)
Read sample online Download sample
Nonfiction Biography & autobiography Composers & musicians
warning_amber
One or more licenses for this book have been acquired by your organisation details
EPUB
Unlimited loans, 2 years, One at a time
Details

The second volume of the extraordinary life of the great music and literary icon Leonard Cohen, in the words of those who knew him best.

Poet, novelist, singer-songwriter, artist, prophet, icon—there has never been a figure like Leonard Cohen. He was a true giant in contemporary western culture, entertaining and inspiring the world with his work. From his groundbreaking and bestselling novels, The Favourite Game and Beautiful Losers, to timeless songs such as “Suzanne,” “Dance Me to the End of Love,” and “Hallelujah,” Cohen is one of the world’s most cherished artists. His death in 2016 was felt around the world by the many fans and followers who would miss his warmth, humour, intellect, and piercing insights.

Leonard Cohen, Untold Stories chronicles the full breadth of his extraordinary life. This second of three volumes—From This Broken Hill—follows him from the conclusion of his first international music tour in 1971 as he continued to compose poetry, record music, and search for meaning into the late 1980s. The book explores his decade-long relationships with Suzanne Elrod, with whom he had two children, and various other numerous romantic partners, including the beginning of his long relationship with French photographer Dominique Issermann and, simultaneously, a five-year relationship with a woman never previously identified.

It is a challenging time for Cohen. His personal life is in chaos and his career stumbles, so much so that his 1984 album, Various Positions, is rejected by Columbia Records, while other artistic endeavours fail to find an audience. However, this period also marks the start of his forty-year immersion in Zen Buddhism, which would connect him to the legendary Zen master Joshu Sasaki Roshi and inspire some of his most profound and enduring art.

In From This Broken Hill, bestselling author and biographer Michael Posner draws on hundreds of interviews to reach beyond the Cohen of myth and reveal the unique, complex, and compelling figure of the real man. Honest and entertaining, this is a must-have book for any Cohen fan.