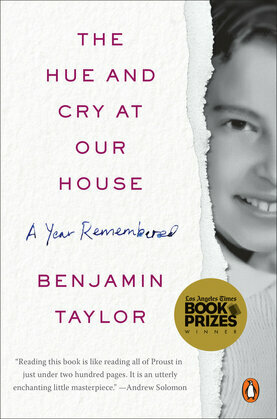 The Hue and Cry at Our House

The award-winning memoir of one tumultuous year of boyhood in Fort Worth, Texas, opening with a handshake with JFK, and recalling the changes and revelations of the months that followed.

“A marvel of a book—elegant, touching, singular.” —Mary Karr

After John F. Kennedy’s speech in front of the Hotel Texas in Fort Worth on November 22, 1963, he was greeted by, among others, an 11-year-old Benjamin Taylor and his mother waiting to shake his hand. Only a few hours later, Taylor’s teacher called the class in from recess and, through tears, told them of the president’s assassination. From there Taylor traces a path through the next twelve months, recalling the tumult as he saw everything he had once considered stable begin to grow more complex. Looking back on the love and tension within his family, the childhood friendships that lasted and those that didn’t, his memories of summer camp and family trips, he reflects upon the outsized impact our larger American story had on his own.

Benjamin Taylor is one of the most talented writers working today. In lyrical, translucent prose, he thoughtfully extends the story of twelve months into the years before and after, painting a portrait of the artist not simply as a young man, but across his whole life. As he writes, “[A]ny twelve months could stand for the whole. Our years are so implicated in one another that the least important is important enough . . . Any year I chose would show the same mettle, the same frailties stamping me at eleven and twelve.”