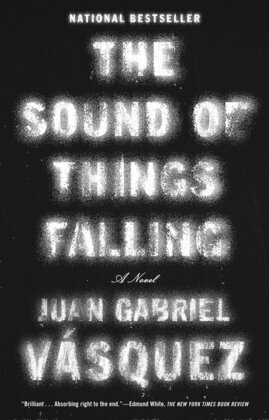 The Sound of Things Falling

* National Bestseller and winner of the 2014 International IMPAC Dublin Literary Award
* Hailed by Edmund White as "a brilliant new novel" on the cover of the New York Times Book Review
* Lauded by Jonathan Franzen, E. L. Doctorow and many others

From a global literary star comes a prize-winning tour de force – an intimate portrayal of the drug wars in Colombia.

Juan Gabriel Vásquez has been hailed not only as one of South America’s greatest literary stars, but also as one of the most acclaimed writers of his generation. In this gorgeously wrought, award-winning novel, Vásquez confronts the history of his home country, Colombia.

In the city of Bogotá, Antonio Yammara reads an article about a hippo that had escaped from a derelict zoo once owned by legendary Colombian drug kingpin Pablo Escobar. The article transports Antonio back to when the war between Escobar’s Medellín cartel and government forces played out violently in Colombia’s streets and in the skies above. Back then, Antonio witnessed a friend’s murder, an event that haunts him still. As he investigates, he discovers the many ways in which his own life and his friend’s family have been shaped by his country’s recent violent past. His journey leads him all the way back to the 1960s and a world on the brink of change: a time before narco-trafficking trapped a whole generation in a living nightmare.

Vásquez is “one of the most original new voices of Latin American literature,” according to Nobel Prize winner Mario Vargas Llosa, and The Sound of Things Falling is his most personal, most contemporary novel to date, a masterpiece that takes his writing—and will take his literary star—even higher.