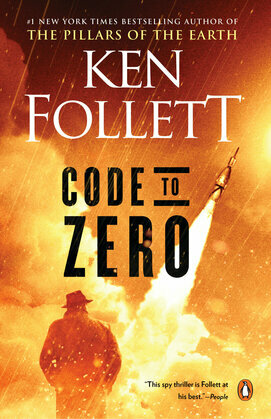 In this classic Cold War thriller, #1 New York Times bestselling author Ken Follett puts his own electrifying twist on the space race between the U.S. and the Soviet Union. As the clock counts down to a shocking climax, "Code to Zero's split-second suspense proves that . . . [Follett is] still a hell of a storyteller" (Entertainment Weekly).

January, 1958—the darkest hour of the Cold War and the early dawn of the space race. On the launch pad at Cape Canaveral sits America’s best hope to catch up with the Russians: the Explorer I satellite. But at the last moment, the launch is delayed due to weather, even though everyone can see it is a perfectly sunny day.

The real reason for the delay rests deep in the mind of a NASA scientist who has awoken that morning to find his memory completely erased. Knowing only that he’s being followed and watched at every turn, he must find the clues to his own identity before he can discover who is responsible. But even more terrible is the dark secret that they want him to forget. A secret that can destroy the Explorer I—and America’s future. . . .

Praise for Code to Zero:

"This spy thriller is Follett at his best." —People