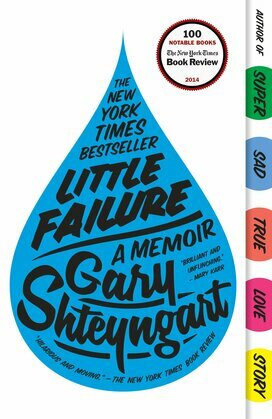 NAMED ONE OF THE BEST BOOKS OF THE YEAR BY MORE THAN 45 PUBLICATIONS, INCLUDING The New York Times Book Review • The Washington Post • NPR • The New Yorker • San Francisco Chronicle • The Economist • The Atlantic • Newsday • Salon • St. Louis Post-Dispatch • The Guardian • Esquire (UK) • GQ (UK)

Little Failure is the all too true story of an immigrant family betting its future on America, as told by a lifelong misfit who finally finds a place for himself in the world through books and words. In 1979, a little boy dragging a ginormous fur hat and an overcoat made from the skin of some Soviet woodland creature steps off the plane at New York’s JFK International Airport and into his new American life. His troubles are just beginning. For the former Igor Shteyngart, coming to the United States from the Soviet Union is like stumbling off a monochromatic cliff and landing in a pool of Technicolor. Careening between his Soviet home life and his American aspirations, he finds himself living in two contradictory worlds, wishing for a real home in one. He becomes so strange to his parents that his mother stops bickering with his father long enough to coin the phrase failurchka—“little failure”—which she applies to her once-promising son. With affection. Mostly. From the terrors of Hebrew School to a crash course in first love to a return visit to the homeland that is no longer home, Gary Shteyngart has crafted a ruthlessly brave and funny memoir of searching for every kind of love—family, romantic, and of the self.

“Hilarious and moving . . . The army of readers who love Gary Shteyngart is about to get bigger.”—The New York Times Book Review

“A memoir for the ages . . . brilliant and unflinching.”—Mary Karr

“Dazzling . . . a rich, nuanced memoir . . . It’s an immigrant story, a coming-of-age story, a becoming-a-writer story, and a becoming-a-mensch story, and in all these ways it is, unambivalently, a success.”—Meg Wolitzer, NPR