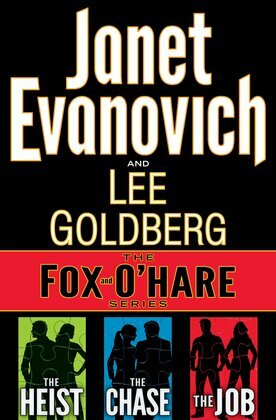 The Fox and O'Hare Series 3-Book Bundle: The Heist, The Chase, The Job

From Janet Evanovich, the acclaimed creator of Stephanie Plum, and Lee Goldberg, author and television writer for Monk, comes a series of New York Times bestselling novels that “mix the humor from Evanovich and Goldberg’s books with the intricate cons seen in the best episodes of Mission: Impossible” (Library Journal).

Charming con man Nicolas Fox and FBI special agent Kate O’Hare are the unlikely pair that is secretly tracking down criminals the law can’t touch. Now their first three adventures are together in one action-packed ebook bundle:

THE HEIST
THE CHASE
THE JOB
Also includes the prequel short stories “Pros and Cons” and “Shell Game” and an excerpt from The Scam, the riveting fourth novel in the Fox and O’Hare series!

Nicolas Fox is an international con man, famous for running elaborate scams on very rich and powerful people. He knows that the FBI has been hot on his trail for years—particularly FBI Special Agent Kate O’Hare. But just when it seems that Fox has been captured for good, he pulls off his greatest con of all. He convinces the FBI to offer him a job, working side by side with O’Hare.

Together Fox and O’Hare are going to have to find a way to take down Derek Griffin, a corrupt investment banker charged with stealing millions from his clients—an assignment that will lead them down the back alleys of Berlin, into the deserts of California, and to a remote Indonesian island. High-speed chases, pirates, and Toblerone bars are all in a day’s work . . . if O’Hare and Fox don’t kill each other first.

Praise for the Fox and O’Hare series

“The laugh-out-loud humor that readers expect from Evanovich is in full force. . . . Everyone will be eager for the next book in the series.”—Associated Press, on The Heist

“Great fun, with plenty of twists.”—The Sacramento Bee, on The Chase

“This suspense series continues to mix the humor from Evanovich and Goldberg’s books with the intricate cons seen in the best episodes of Mission: Impossible. The banter and thrills are nonstop, and readers will be anxious to see what happens next.”—Library Journal, on The Job