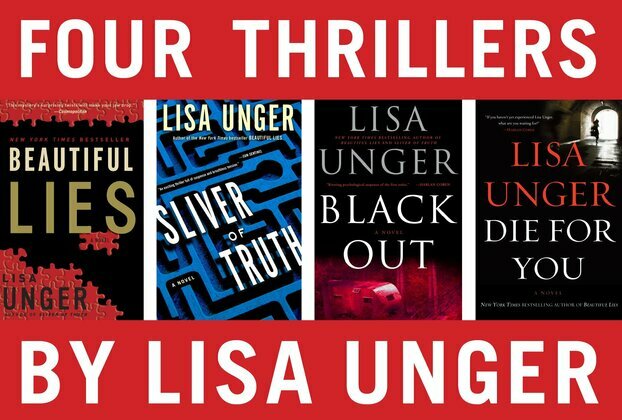 Four Thrillers by Lisa Unger: Beautiful Lies, Sliver of Truth, Black Out, Die for You

Four thrilling novels by bestselling novelist Lisa Unger are now available as one complete series. Read all four novels in order for the first time digitally and delve into Unger’s world—full of nightmarish journeys, bone-chilling discoveries, and breathtaking consequences, in a complete package, never before available.

Beautiful Lies
If Ridley Jones had just slept ten minutes later, she would still be living the beautiful lie she used to call her life. Instead, she’s in the right place at the right time to unleash a chain of events that brings a mysterious package to her door—a package which informs her that her entire world is a sham.  Suddenly forced to question everything she knows about herself and her family, Ridley wanders into dark territory she never knew existed.
"Suspenseful, sensitive, sexy, subtle . . . The best nail-biter I have read for ages. Highly recommended."
—Lee Child

Sliver of Truth
Just as she’s beginning to move on with her life, another seemingly mundane act—picking up a few envelopes of prints at a photo lab—puts Ridley Jones at the nexus of a global network of crime. At once hunting down a ghost and finding her own life in danger, Ridley wonders if she ever had the power to shape her own destiny . . . and whether love has any reality beyond her imagination.

Black Out
On the surface, Annie Powers’s life in a wealthy Floridian suburb is happy and idyllic. But the bubble surrounding Annie is pricked when she senses that the demons of her past have resurfaced and, to her horror, are now creeping up on her. Disturbing events—the appearance of a familiar dark figure on the beach, the mysterious murder of her psychologist—trigger strange and confusing memories for Annie, who realizes she has to quickly piece them together before her past comes to claim her future . . . and her daughter.

“Riveting psychological suspense of the first order. If you haven’t yet experienced Lisa Unger, what are you waiting for?”—Harlan Coben

Die For You
Isabel Raine thought she had everything—a successful career, a supportive family, and a happy marriage to the man she loved. Then one ordinary morning, her husband picks up his briefcase, kisses her good-bye, and simply vanishes. Now the only thing Isabel knows for sure is that her husband of five years is gone. Where is he and who is he are questions no one seems able to answer. But Isabel will not rest until she discovers the truth about the man she loves, even if it means risking everything—including her own life.