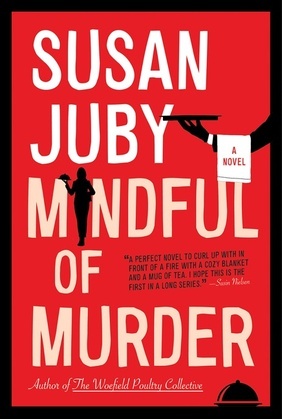 Meet Helen Thorpe. She’s smart, preternaturally calm, deeply insightful and a freshly trained butler. On the day she is supposed to start her career as an unusually equanimous domestic professional serving one of the wealthiest families in the world, she is called back to a spiritual retreat where she used to work, the Yatra Institute, on one of British Columbia’s gulf islands. The owner of the lodge, Helen’s former employer Edna, has died while on a three-month silent self-retreat, leaving Helen instructions to settle her affairs.

But Edna’s will is more detailed than most, and getting things in order means Helen must run the retreat for a select group to determine which of Edna’s relatives will inherit the institute. Helen’s classmates, newly minted butlers themselves, decide they can’t let her go it alone and arrive to help Helen pull things off. After all, is there anything three butlers can’t handle? As Helen carries out the will’s instructions, she begins to think that someone had reason to want Edna dead. A reluctantly suspicious investigator, Helen and her band of butlers find themselves caught up in the mystery.