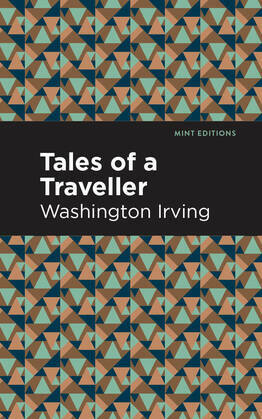 Tales of a Traveller

by Washington Irving (Author)
Read sample online Download sample
Fiction Short stories Historical
warning_amber
One or more licenses for this book have been acquired by your organisation details
EPUB
Unlimited loans, One at a time
Details

Separated into four parts, Tales of a Traveller features twenty-seven works of short fiction, all catering to a sense of adventure and interest in the macabre. The first part, titled Strange Stories by a Nervous Gentleman explores the odd escapades of its protagonists. In The Adventure of a German Student, a young man meets a strange woman on a stormy night, looking for shelter. The student allows the woman to stay in his apartment for the night, but the morning brings consequences that he never could have imagined. The second part of the collection is titled Buckthrone and his Friends and features anecdotes from the life of a man named Buckthrone while exploring the struggles and experiences of artists. In The Club of Queer Fellows, Buckthrone introduces the narrator to a lesser-known bar that acts as a hangout spot for interesting and offbeat people, such as actors and literary critics. Titled The Italian Banditti, part three of Tales of a Traveller, follows a string of robberies and unlikely heroes. As the fourth and final part of the collection, The Money Diggers features exciting tales of pirates and curses. Based on the real historical figure, Captain William Kidd, Kidd the Pirate depicts a young man who is hired to stop the pirates, but becomes one instead. Also included in the final part of Tales of a Traveller is the famed short story The Devil and Tom Walker. After a mysterious figure called Old Scratch offers to reveal the riches of Captain Kidd in exchange for a great price, Tom Walker is faced with a tricky decision.

Featuring twenty-seven works of short fiction, and redesigned with a striking new cover and stylish font, this edition of Washington Irving’s Tales of a Traveller is accessible and perfect for a contemporary audience.