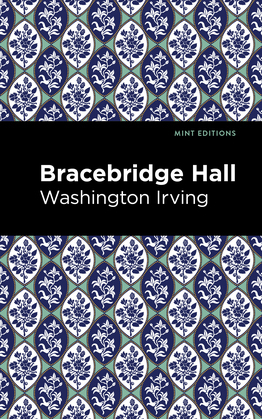 by Washington Irving (Author)
Read sample online Download sample
Fiction Short stories Historical
warning_amber
One or more licenses for this book have been acquired by your organisation details
EPUB
Unlimited loans, One at a time
Details

Bracebridge Hall, written by the esteemed author, Washington Irving, is a collection of location-based character sketches, detailing the lives and personalities of the occupants of a countryside manor in Yorkshire, England, owned by a squire. Narrated by an American man who is an old acquaintance of the squire, Bracebridge Hall follows the events leading up to the wedding of the squire’s son, Guy, and his bride-to-be, Julia. Beginning with the arrival of the guests, the narrative jumps from character to character to tell their individual stories and relations to the wedding. Alongside the narratives of the wedding guests, a vivid picture of the historic Bracebridge manor is painted with careful attention to detail. The décor and architecture of the home pays homage to a time long before its own, which is even reflected in the people who serve in the estate. Many of the servants were born in the manor and inherited their parents’ job and uniform. As the wedding preparations continue, readers are allowed a privileged listen to the servant’s gossip, including the story of the rumored love affair between the squire and the eldest, most respected servant. After the gossip and conjecture of the servants completes a portrait of the manor’s history, the ceremony proceeds, honoring English tradition and proving to be an idealistic and envious affair of indulgence.

With humor and sweetness, Washington Irving explores the personalities and side plots of a diverse group of characters. Including people of all classes, Bracebridge Hall portrays an idealized picture of country life in early 19th century England. The episodic form and intricate prose of Washington Irving creates an enchanting and entertaining reading experience for audiences nearly two centuries later, serving as a testament to Irving’s bold and voluptuous characterization of both the setting and characters.