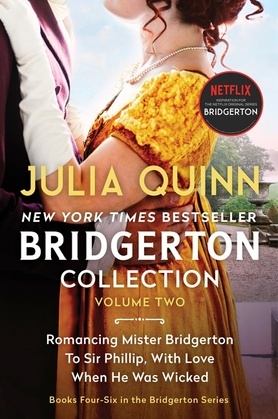 Books Four-Six in the Bridgerton Series
by Julia Quinn (Author)
Read sample online Download sample
Fiction Romance Regency Historical Historical
warning_amber
One or more licenses for this book have been acquired by your organisation details
EPUB
26 loans, One at a time
Details

An enchanting collection containing books four, five, and six of #1 New York Times bestselling author Julia Quinn’s beloved Regency-set Bridgerton novels—Romancing Mister Bridgerton; To Sir Phillip, with Love; and When He Was Wicked—now a series created by Shondaland for Netflix.

Penelope Featherington has secretly adored her best friend’s brother from afar for forever—until she stumbles across Colin Bridgerton’s deepest secret and fears she doesn't know him at all. Meanwhile, Colin is tired of his reputation as an empty-headed charmer and of the notorious gossip columnist Lady Whistledown. Upon his return to London, he discovers everything has changed—especially Penelope Featherington! The girl who was always simply there suddenly haunts his dreams. When he discovers that Penelope has secrets of her own, this elusive bachelor must decide . . . is she his biggest threat or his promise of a happy ending?

To Sir Phillip, With Love

Sir Phillip knew that Eloise Bridgerton was a spinster, and so he’d proposed, figuring she’d be timid and desperate to marry. Except . . . she wasn’t. And all he wanted to do was kiss her . . . As for Eloise, she couldn’t marry a man she had never met! Yet, she found herself in a carriage on her way to meet her perfect match. Except . . . he wasn’t. Despite being handsome, Phillip was a large, ill-mannered brute. But when he kissed her, the world simply fell away… could this imperfect man be perfect for her?

When He Was Wicked

After a lifetime of smiling slyly as women chased him, Michael Stirling, London’s most infamous rake, took one look at Francesca Bridgerton and fell hopelessly in love. Unfortunately for Michael, Francesca’s surname was to remain Bridgerton for only a mere thirty-six hours longer—they met at a supper celebrating her imminent wedding to his cousin. But that was then . . . Now Michael is the earl and Francesca is free, but she still sees him as a dear friend. Michael dares not profess his love . . . until one dangerous night, passion proves stronger than even the most wicked of secrets . . .