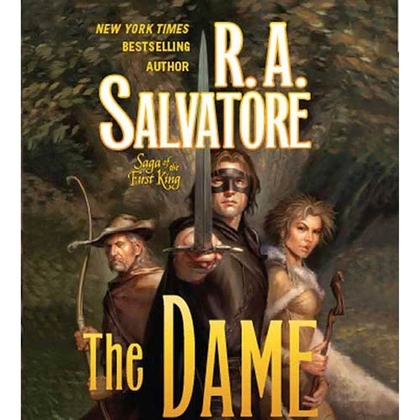 Book Three of the Saga of the First King
by R. A. Salvatore (Author), Erik Singer (Narrateur)
Fiction Fantasy Epic
warning_amber
One or more licenses for this book have been acquired by your organisation details
AUDIOBOOK
Unlimited loans, 2 years, One at a time
Details

R.A. Salvatore's cast of exciting characters continue the story in war-torn Corona in The Dame, the third book in the Saga of the First King series

The vast road network of Honce, completed a decade before, had brought great optimism to the people of the land. Commerce could travel more freely and so could armies, and those armies, it was hoped, would rid the land at long last of the vicious, bloody cap dwarfs and goblins. For the first time, the many individual kingdoms, the holdings of Honce, would be brought closer together, perhaps even united. For the last few years, those promises had become a nightmare to the folk, as two powerful lairds fought for supremacy of a hoped-for united kingdom.

Bransen Garibond, the Highwayman, held little real interest in that fight. To him the warring lairds were two sides of the same coin. Whichever side won, the outcome for the people of Honce would be the same, Bransen believed. A journey north, however, taught Bransen that his views were simplistic at best, and that some things--like honor and true friendship-- might truly matter.

In R. A. Salvatore's The Dame, Bransen's road becomes a quest for the truth, of Honce and of himself, a quest to put right over wrong. That path is fraught with confusion and fraud, and a purposeful blurring of morality by those who would seek to use the Highwayman's extraordinary battle skills and popularity among the commonfolk for their own nefarious ends.