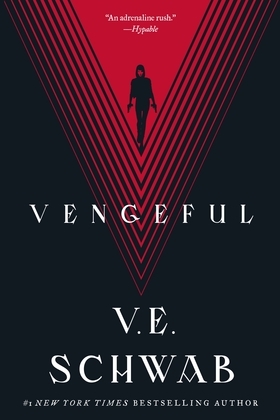 But Marcella Riggins needs no one. Flush from her brush with death, she’s finally gained the control she’s always sought—and will use her new-found power to bring the city of Merit to its knees. She’ll do whatever it takes, collecting her own sidekicks, and leveraging the two most infamous EOs, Victor Vale and Eli Ever, against each other.

With Marcella's rise, new enmities create opportunity--and the stage of Merit City will once again be set for a final, terrible reckoning.

“Readers won't be able to put down this dark and riveting tale of power and revenge.”—Kirkus Reviews, starred

“Schwab's characters feel vital and real, never reduced to simple archetypes...In a genre that tends toward the flippant or pretentious, this is a rare superhero novel as epic and gripping as any classic comic. Schwab's tale of betrayal, self-hatred, and survival will resonate with superhero fans as well as readers who have never heard of Charles Xavier or Victor von Doom.”—Publishers Weekly (starred review)