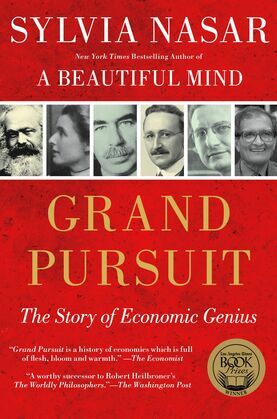 In a sweeping narrative, the author of the megabestseller A Beautiful Mind takes us on a journey through modern history with the men and women who changed the lives of every single person on the planet. It’s the epic story of the making of modern economics, and of how economics rescued mankind from squalor and deprivation by placing its material fate in its own hands rather than in Fate.

Nasar’s account begins with Charles Dickens and Henry Mayhew observing and publishing the condition of the poor majority in mid-nineteenth-century London, the richest and most glittering place in the world. This was a new pursuit. She describes the often heroic efforts of Marx, Engels, Alfred Marshall, Beatrice and Sydney Webb, and the American Irving Fisher to put those insights into action—with revolutionary consequences for the world.

From the great John Maynard Keynes to Schumpeter, Hayek, Keynes’s disciple Joan Robinson, the influential American economists Paul Samuelson and Milton Freedman, and India’s Nobel Prize winner Amartya Sen, she shows how the insights of these activist thinkers transformed the world—from one city, London, to the developed nations in Europe and America, and now to the entire planet. In Nasar’s dramatic narrative of these discoverers we witness men and women responding to personal crises, world wars, revolutions, economic upheavals, and each other’s ideas to turn back Malthus and transform the dismal science into a triumph over mankind’s hitherto age-old destiny of misery and early death. This idea, unimaginable less than 200 years ago, is a story of trial and error, but ultimately transcendent, as it is rendered here in a stunning and moving narrative.